BRADLEY V. CAVERLY, AGE 25, OF LUDLOW, was arrested and charged with:

On Sunday, Oct. 2, at approximately 7:45 p.m., Ludlow Police received a complaint at the police station from a woman asking for help with an out-of-control male, and responded to a home on Miller Street near Oak Knolls Circle.

Upon arrival, officers were immediately confronted by a man, later identified as CAVERLY, who began threatening to kill officers with his dog, a large black lab mix named Bear.

The dog immediately showed aggressive behavior, growling and lunging at officers, and soon bit the first responding officer in the thigh. That officer deployed his Taser, but it was ineffective.

Backup officers arrived a short time later and deployed their Tasers on CAVERLY and the dog. Five officers working together eventually forced CAVERLY to submit to arrest despite his violent resistance.

The first responding officer was treated for non life-threatening injuries at a local hospital, and was released. CAVERLY refused medical care and the dog was not injured.

CAVERLY was arraigned Monday in Palmer District Court, where he was ordered held without bail pending a dangerousness hearing on Thursday, Oct. 6.

The dog was surrendered to Ludlow Animal Control for quarantine. A vicious dog hearing regarding the dog will be scheduled with the Ludlow Board of Selectmen at a later date.

“The arrestee’s violent actions against the responding officers and his use of his large, aggressive dog against the officers, shows the dangers that police officers face every day from angry and hostile criminals living in our communities,” said Chief Valadas. 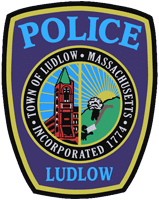